An American Modernist,  Allan Houser was the first Native American artist who broke the boundaries and didn’t follow the traditional styles. His Warm Springs Chiricahua Apache heritage, his love of nature, his inspiration from Henry Moore and other contemporaries are shown in his bronze works. On loan from the Allan Houser, Inc. south of Santa Fe, New Mexico, this wonderful exhibit is very interesting to view after having the Henry Moore sculptures here last year. These sculptures are smaller and more intimate but still hold their own with beautiful form, texture, and symbolism. 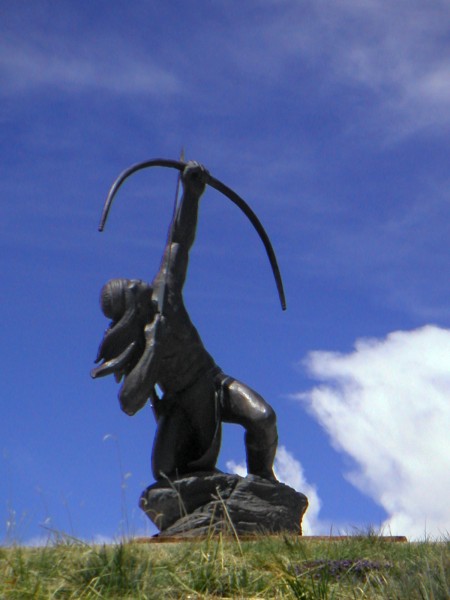 Imagine Allan’s father Sam telling this story that was passed to him by his uncle Geronimo: A long time ago, the Apache suffered during a drought. After much discussion, they chose a young man – not the biggest or strongest, but the purest of heart – to take the  special blessed arrow to the top of the highest peak. There into the darkness of night, he shot the arrow asking for rains to sustain his people, the plants and the animals. The rains came and the Apaches survived.

Really powerful and beautiful sculpture. Notice the arm is out of proportion giving emphasis to the act of shooting the arrow. There is a special edition of this at the Smithsonian. An edition was at the entry to the Olympic Village in Salt Lake City in 2002, and the image has graced the license plates for Oklahoma since 2004. This edition is owned by Colorado Springs Fine Arts Center – but for some reason we had an exceptionally rainy May and July so it is working its magic in this location on Anna’s Overlook. 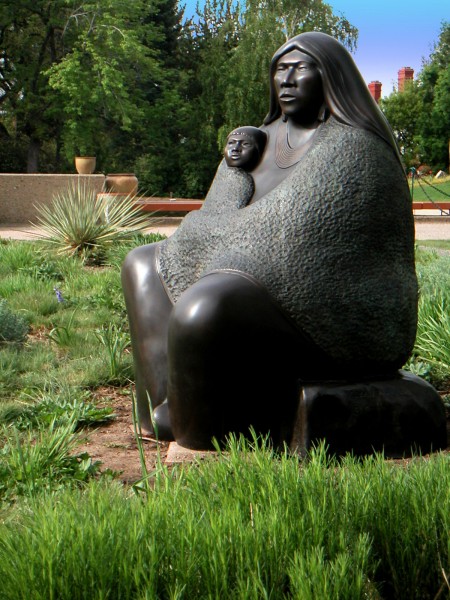 This is perhaps a self portrait of Allan in his mother Blossom’s arms. I think it speaks to the nurturing needed for all of us, the plants and the earth – this is the essence of life especially to the native American cultures. It was originally carved in stone and he used that to make this bronze casting. It has wonderful texture and dual colors of patina. I love the smoothness and shape of the hair in the back as well. 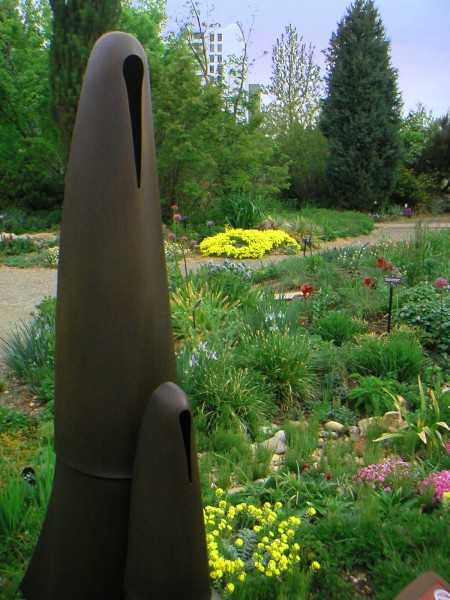 This Was Our Home by Allan Houser, Fabricated Bronze, 1993

This piece is made out of flat bronze, shaped with darts as you would make a dress. It is so smooth it is impossible to find any “seams”. You can really see his modernism showing, how he has simplified the figures  of a Mother and Child theme. The gardens were really spectacular after all of the May rains especially this day in the Rock Garden. 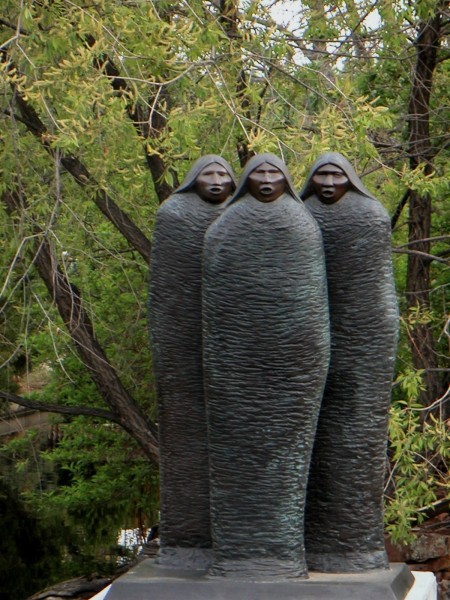 This is a small piece with a beautiful reflection in the pond at Sacred Earth Garden. There is much to wonder about what they are calling, singing, shouting that is echoed repeatedly off the canyon walls. A wonderful mixture of nature and culture – the reflection reminding us to reflect on the stories and songs of our history. 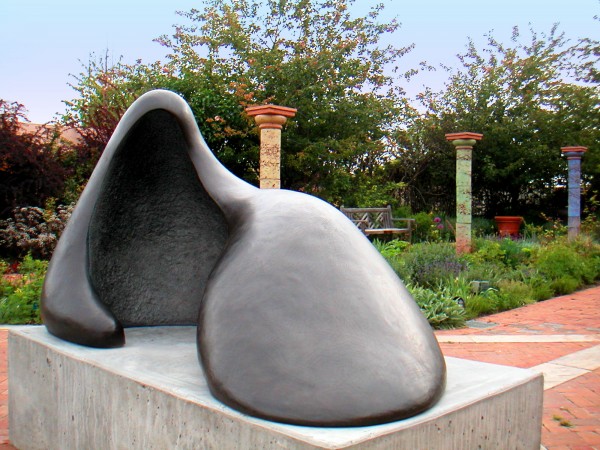 This reclining figure has walked away, left her blanket with a void that shows us her form. The exterior is very smooth but the interior is textured like we would see in the biomorphic (bones) examples of the Modernists. In the early morning before the gardens are fully opened, you can very much feel the Solitude and peacefulness in this Romantic Garden. 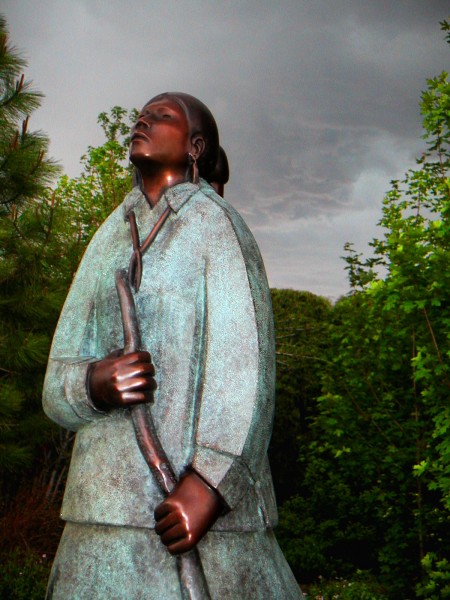 The storm clouds were brewing and gave this sculpture some great lighting as well as a formidable back drop. This is a Dineh (Navajo) shepherdess depicting the first drops of light rain on her face. I love the green patina which looks like it was created with natural moisture. The angled lines give a nice definition, to make you pay attention to the art. 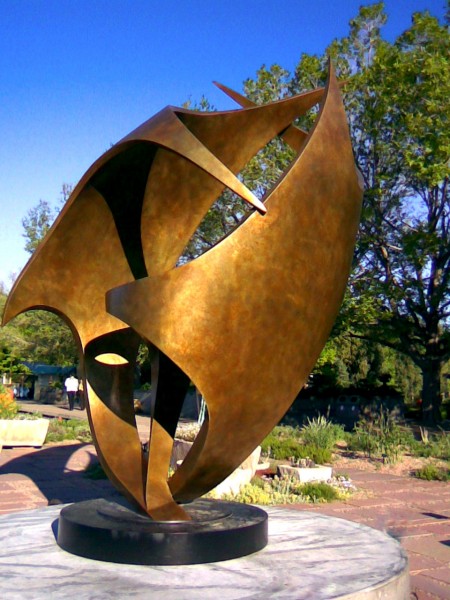 I caught this eagle eye looking back at me from the shadows and thought maybe this was a sculpture about the flight of birds? Or is it a couple dancing? Or a dust devil spinning across the plains? Here we feel the force of the wind but this sculpture is constructed of flat pieces of bronze, expertly put together, polished smooth. This sculpture fascinates me and is probably my very favorite. I think I could live with it every day and enjoy all the variations of light, shadow and mood. I really am enjoying all of these sculptures and experiencing them at the Gardens. Hope you get the chance to enjoy them somewhere in your wanderings.

This entry was posted in Art, Colorado, Gardens. Bookmark the permalink.